The Hass variety is the predominant avocado produced in Australia, accounting for approximately 87 per cent of production, with Shepard accounting for about 10 per cent. The Avocado tree can live to around 100 Years old. Some wild avocado tress recorded in Mexico are 400 years old and still producing fruit!

The tree begins to produce its first fruit somewhere between 5 – 8 Years. Depending on the region and the weather conditions depends on which season the fruit grows. in fact In Australia Hass avocados grow all year round, requiring Sub – Topical/ Tropical Climates. Once the tree begins to produce fruit it can continue fruiting for up to 50 plus years.

Latin name of the Avocado Tree is Persea Americana – Laurels Family.
Ancient avocados are believed to originate from South Central Mexico in the Aztec times and later became native to Central and South America. Fun fact,  the Aztecs called the Avocado Ahuacatl meaning testicle as it looks like one and they believed the fruit helped in fertility.

Avocados are a healthy source of Fats. They contain more potassium than bananas and are loaded with fiber. Grounding up the Avocado Nut into powder form is extremely high in antioxidants and can be used medicinally to assist fighting off cancer.

At maturity Avocado Trees can get up to 18 M high however pruning them back is much easier for fruit picking. The average is usually 5-10 M tall. The tree has a large canopy of about 3-5 M wide. The trunk can grow quite sporadic and ranges from around about 60 cm in diameter with foliage from close to the base to the top of the tree. Best grown in a Sub tropical/ tropical climate.

Avocado trees are a surface root crop and are best grown on a slope to assist with drainage. Root rot (Phytophthora cinnamomi) can develop fairly quickly in poorly-drained soils. It is therefore essential to determine in advance the suitability of the soil for avocado production. The tree’s primary requirement is good drainage. It cannot stand excessive soil moisture or even temporary water-logging.

The flowers of avocado trees are perfect, because they have both male and female parts, but both of these parts are not accessible at all times for pollination. The flowers only open for two days. On the first day, the female part opens for two to four hours and during this time, it can receive pollen.

In Australia flowering is typically spread over six to eight weeks. The flowers are small and inconspicuous (10 mm diameter) and contain a single stigma surrounded by six anthers. The stigma becomes receptive when the flowers open.

Although there is only one seed in an avocado fruit, more than 20 pollen grains need to be deposited on the stigma before a flower will produce a fruit. The trees are normally planted with large gaps between trees when they are young.  However, pollinators such as honey bees tend to move from a flower to the next closest flower so they will probably not readily move between trees. As the trees grow larger, the gap between trees decreases. Although this will probably increase the movement of pollinators between trees, the pollinators are less likely to move completely around a tree. Sometimes bee hives are set up on avocado farms for efficient fruiting. avo tree.jpg 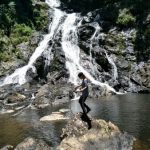 This post is publicly visible, but not listed in the magazine unless you are enrolled as a PDC student.