My method of soil improvement through composting uses a combination of ideas being:

My composting area has only two ‘bins’ made from re-used timber planks and is located within my small orchard, which is covered with netting to prevent access from birds and possums. The reasons I put it here are to take advantage of the overhead protection from animals, it has dappled shade, and the nutrients from the piles leach directly into the soil around my fruit trees.

It’s also not the most attractive space, so this keeps it away from plain sight.

Sometimes I might a rogue pumpkin or cucumber vine sprout up unexpectedly, and this then becomes a groundcover around my fruit trees.

As per the common lasagne layering method I use layers 10-15cm thick of alternating green and brown components. I also add activators throughout the layers to help speed up the process.

The very bottom layer on the ground at the start of the pile is made up of small twigs, broken up fine branches and chopped up bits of grape vine which I prune each year. This is put directly on the ground to allow contact with soil for worms to move through and for aeration of the pile through the gaps between the twigs.

The next layer is brown and is made of fallen dried leaves, dried prunings from shrubs, shredded newspapers or any other carbon rich material I have laying around.

The next layer is green and made up of grass clippings, green prunings that have been put through the mulcher, green fallen leaves, kitchen scraps and crushed egg shells.

An activator I include on this layer is comfrey leaves which are high in nitrogen and they help to accelerate the composting process.

The next layer is brown again, and I’ll add the same kind of materials and crunched up bark, but I also have wood shavings and sawdust which come from the timber I use to make garden beds. This includes cypress pine and redgum. I won’t use treated pine.

Another way I use to accelerate the process is getting my kids to pee on the compost sometimes. Urine is great way to speed it up, and my boys think it’s hilarious that they can pee on mum’s compost.

The green layer again has weeds, chopped up pumpkin vine and fresh food scraps (these are actually added to the piles throughout their life as they are produced, not just in the layers.) I try not to include meat as this encourages rodents. However, when rats and mice are present (because of where my pile is located) and I find them dead and dried up, I put them in the compost too.

Another brown layer, and then I add copious amounts of manure such as matured sheep manure from our local wool shed. Often, I’ll water the compost pile with a mix of water and chook poo which I’ve had sitting in a bucket for a while. This is another of my nitrogen rich compost activators.

The piles are ever evolving and I’ll put anything into it I can find. Sometimes the layers become vague, but as long as all the ingredients are there, they do well. I also keep them covered with hessian or shade cloth held down with bricks.

As the pile in the first bin decomposes, I’ll move it to the 2nd bin to complete the process. In the second bin it’s split into the complete half, and the almost complete half. I turn the pile myself every couple of weeks, but in between I let my chickens do the work. I keep my chickens in the orchard and they do a wonderful job of turning the compost for me when I leave it uncovered for them.

They pick through and eat what they like, including the crushed egg shells, and that’s fine with me. They also poo in it, which helps. As they scratch everything out of the pile it ends up around the fruit trees and kind of becomes mulch for a bit, before I shovel it all back in the there, add some more to it and cover it up again.

The resulting compost can  be used anywhere throughout the garden, especially in the vegetable patch and when planting new shrubs and trees. 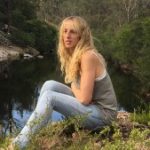 I study 3 days per week in my second year of a Diploma in Horticulture. I work two+ days a week doing garden maintenance and some garden design. And I raise my two beautiful boys 24/7.